Whatever the outrage, a calm assessment of the situation in our country over proroguing parliament has to be alarmed. Even if only 4 extra days, coming when there would be a good case to be made for not proroging for the party conference season, its worrying. It doesn’t feel like the executive respecting the way our constitution works. It smacks of political games.
Of course this is the very stuff of political life. The eliptical nature of the British Constitution while shaped by an expectation that everyone plays by the rules nevertheless develops when people don’t. That’s its nature. And its genius. It gives absolute flexibility, but with a code of honour underpinning it all.
This is where I think most commentators and demagogues are missing a trick. Its not that Johnson has pushed the constitutional boundaries, but the way he has done it. Bercow, that preening monster of a Speaker, has after all played free and yet fair with Parliamentary precedent to give Remainers an advantage, and he hordes didn’t swarm onto the streets. And yes Bercow ignored the advice of his official advisors, his experts as it were, to do so. This didn’t cause cross bench outrage, let alone a sense of a dictatorship. Somehow that is the way we deal with this extraordinary impasse over this most critical of issues.
But it began a precedent that in this particular time all things were up for grabs, so long as you were opposed to Brexit that is. It is perfectly clear therefore that the government as right to consider that an alliance of Remoaners in Parliament would be aided an abetted by a Speaker partisan on this most disinvite of issues, and therefore there was no honest broker, no impartial referee they could rely on to create a level playing field. And so they decided to play dirty. Tit for tat, sort of thing.
However, Johnson has gone one step further, and in this I think he has breached the walls which protect the Constitutional integrity. He lied. He lied not just to the press, but even to fellow members of the cabinet, saying that, in effect, he would never consider preroing parliament, while that was exactly what a small group around him were doing. Admittedly, when you look at his words it could be argued that they dont say he won't do it but they do say he wasn’t thinking about it, and that is exactly what he was doing. He lied. And not just to the general public, but to his own cabinet, and was happy for them to go out repeating the lie while believing it. It was a shameless show of a complete lack of integrity. It is now categorically impossible to trust a word this man says.
This is not just pushing at the boundaries of convention, its blowing up the way the basic way in which the whole game works. Its dastardly, ungentlemanly, with all that those rather fusty words mean. The man is a rotter, and no good can come of it. The man is playing not with the rules, but the game itself. Its cheating not just being clever. And if you are prepared to do this once, you can never be trusted not to do it again.
But let's not forget that is not a Johnson issue. Playing loose with the Constitution has been going on across the board for a long time and its not one sided. We have entered a period when the ability to debate, to stand in your opponents shoes with respect for their ideas, has long passed. The divisions in the country produce debates where opponents are ridiculed and insulted rather than debated with, and usually with some reference to ‘Nazis’, the ultimate in political insults. For example, people have posted Facebook posts paralleling the proroguing of Parliament with the burning of the Reichstag! Its crass history and all about stirring up feelings of outrage  rather than making logical points, something which is all too common in what passes for debate in British public discourse.
Nor should we overlook the part Corbyn and his cronies are playing in this uber drama. Only this week he proposed jumping in a taxi and heading for the palace and demanding to be made caretaker PM, for goodness sake. And he’s the leader of the Opposition. He has failed consistently to lead a robust defence of the Constitution during the entire Brexit process, and given how his cabal has sort to avoid, compromise and generally abuse accountability within the Labour Party I can only think that all this is grist to his mill. Once in Downing Street he would make what Johnson has done look amateur. After all the comrades see the Establishment as entrenched enemies of the people, so Johnson is laying a dangerous precedent for a high handed contempt for due process, accountability and doing things by the book.


It is clear that the shifts away from principle, honour, respect for the system are entrenched across the contemporary political class, and its putting democrats at a disadvantage. All the sense of outrage has, its been pointed out by Liddel in today’s Sunday Times, a whiff of partisanship about. If the issue had been different then it would have been the other side calling umbridge. Instead its outrage feigned for partisan advantage. The chants, the t-shirts, the indignation are not against Brexiteers but the ‘Tory Brexit’, not against Farage and his ilk but ‘the Toffs’. Its all framed as the elite against the working class who are cooped as Remainers because, though they aren’t bright enough to realise it, they will suffer most by a hard Brexit. While I have respect for the facts behind this, i.e. about the impact on the poorest in society, we can only say that they have been highjacked in the most convoluted thinking by those wishing to make a very socialist coup, one which sweeps away the whole Establishemt, i.e. the Constitution, and installs a socialist republic. The attack on OUR way of democratic life is under attack, and on all sides 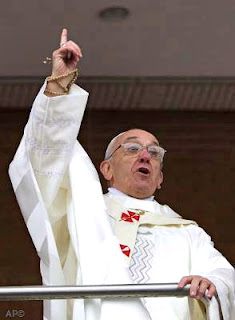 Pope Francis and the Jesus Prayer